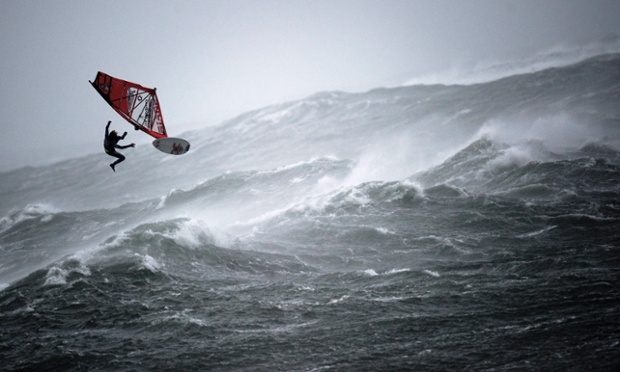 Frenchman Thomas Traversa was crowned the champion of the storm surfing universe. Despite weighing just 60 kilos, Traversa won the final leg of the Red Bull Storm Chase in hurricane conditions off the coast of Cornwall, UK, in front of Marcilio Browne from Brazil and Leon Jamaer from Germany.

With building-high waves and gusts of wind reaching 70 knots, only the best were nominated to participate in the “Red Bull Storm Chase”. During an 18-month holding-period, ten of the world’s best windsurfers waited patiently to catch three of the biggest storms on oceans around the globe to determine who was the very best. After Mission 1 in Ireland (January 2013) and a second mission in Tasmania, Australia (August 2013), Red Bull Storm Chase picked the storm-ravaged coast of Cornwall, U.K., for the third and final location for a showdown between the remaining four.