Amazing Tongue Twister Rap from A to Z 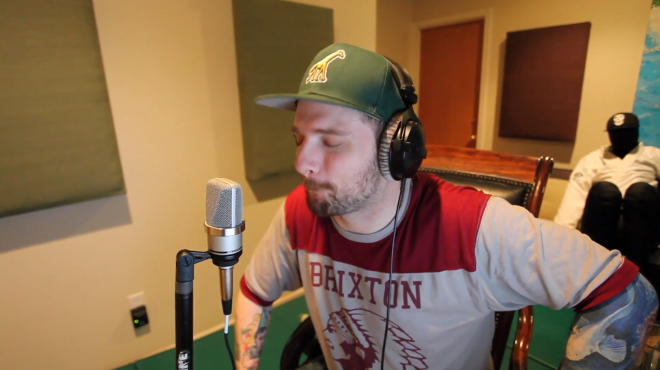 FULL LYRICS HERE:
I…Adamantly attack the alphabet
with an anecdotal algorithm made of Adamantium
I’m like an Adderrall addicted anaconda or an alcoholic
an asshole, like A-Rod, no anabolic s,
But I, brutally and beautifully butcher the banging beat
brushin’ bubbly allover your booby and booty beef
cause I’m a carpenter, when I come carvin’ your carcass
leaving all these carp fish crushed on the carpet
crumble chron’ with my Colorado and my Cal cronies
cram it full of condiments like it’s a Calzone
delicious! but I didn’t drive and drink
whether diamonds or dimes man I’m diving deep like an
electric eel, I’m elegantly eloquent and every cent I’ve ever earned
just entered me in the election
I got eleven brains like an enormously educated Einstein with Elephantitis
of the erection
a freak! I’m fighting with a flatfooted felon
five falcons just flew to a fountain, and fell in
Googling googly-eyed girls to get inside
golly gee from GlasGow to Guatemela’s gentrified
a hippopotamus is high on heroin he heckles me
and hires Haitian Hank to hand his hoe a hysterectomy
in hateful hieroglyph I hurl-out hyperbolic hubris
and hang with Hipster Helen the hooker with huge hips
I’m ill. I’m Icarus. I ignite idiots in idioms and issues
jumpy jargon I joust like Jacare jivin Japanese Judo and Jiujitsu
killin em like a kid.. got a Kilogram of Ketamine for Kwanza
in a knitted Kimono made out of Komodo Dragon skin
I’m richer than a Klingon kickin it at the Kremlin
but I kick through your door, kall me Kramer Kardashian
Lethal. Literally litter a little limerick
that be littler than a Leprechaun
a menace that’ll manifest the melancholy mayhem
makin a metamorphosis until mechanized like Megotron
Nick Nolte: a nerdy native of Nebraska
needs a neon ninja and a nectarine from NASA
Ominously, I mean it’s obvious you see a:
orthodontist oozing out oodles of onomatopoeia
Oswalt: Patton
pickin a pocket pluckin a patent
I pickle purple poop in Patron for pure passion
I got a question, I gotta quiz ya
should I quirk up the quotes and make the flow quicker
really getting ready for the revolution
reeled a rotten rhythm ring around a Russia Ronda Rousey resort
serve a simple sentiment a simile that’s smokin
like a sheet of Sudafed i’m swiftly swimming like a seahorse
TITTIES ON ATILLA TELL A TELLER THAT’LL TOE TAG
TERMINATOR GUN INSIDE A TURTLE TATTERED TOTE BAG
THUGS
ARE UN-AMERICAN UNATTRACTIVE AND UNWANTED AS AN UGLY PAIR OF UGG’S
VIVID AND VIVACIOUSLY VENOMOUS
With the wicked wombats only walking where women is
gettin xenophobic at the Xanadu
XoXo
Yippy-ki-yay,!
Yours’ Truly,
Mac
YES YO!!!

Tweet
This entry was posted in STYLE, MUSIC, MOVIES, CULTURE. Bookmark the permalink.