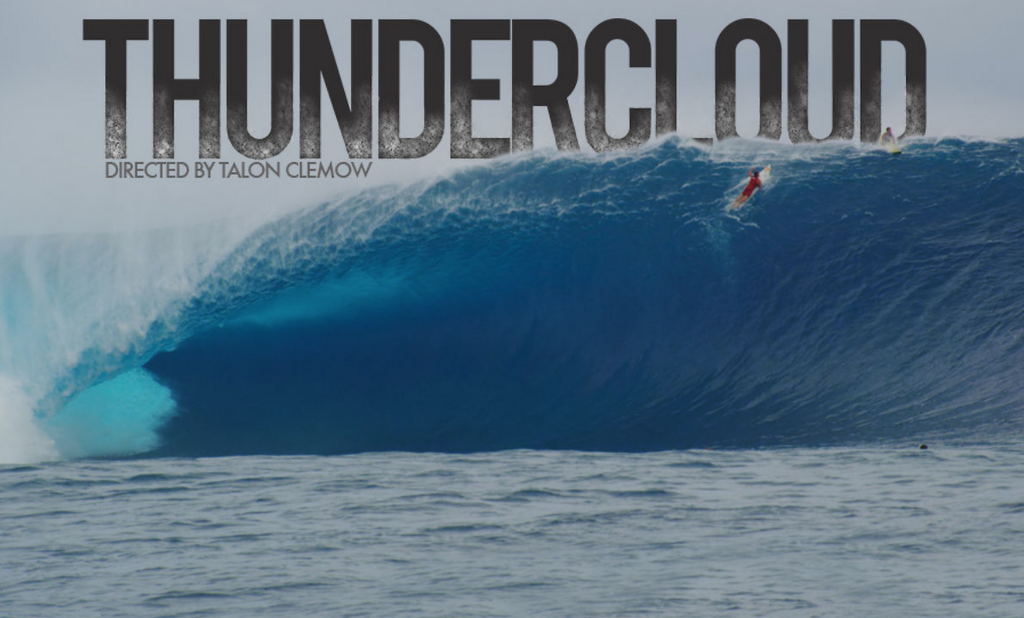 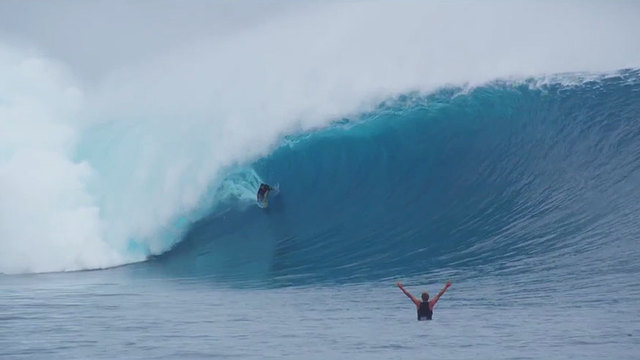 Indie filmmaker, Talon Clemow, on his attempt to do justice to the greatest day of surfing in living memory

From 2010 through to the unforgettable events of the Volcom Fiji Pro in 2012, Cloudbreak – the reef off the island of Tavarua – witnessed a series of harrowing surfing performances that shook the sport to its core. Even more remarkable was that the men behind it all were in fact not the lauded million-dollar-a-year World Tour surfers, but part-time professionals happy to risk their lives for nothing more than the pure thrill of splitting a 20-foot tube. Thundercloud is an exceptional feature documentary by Gold Coast-based filmmaker, Talon Clemow, exploring all this and more.

At what point during that famous day in 2012 did you realise you were watching history unfold?

TC: When I saw (Ian) Walshy’s wave. That was the point when I was like, oh my god, this is next level. He took off, came off the bottom and as I zoomed in I could see this thing just rifling down the line and he pulled into it and just got really, really deep. I thought he was gone and then it spat and he just came flying through the spit. It was incredible, one of the deepest barrels I’d seen. I just went, woah! Up until then it had been (Dave) Scardy’s barrel in 2010 and Hippo in 2011 that were the benchmarks but that had definitely surpassed it.

You’ve put together an incredible feature film that takes place over not only on the events of the super swell of 2012 but also the similarly significant swells of 2010 and 2011. Was it obvious to you at the time that surfing was changing before your very eyes?

In 2010 when the decree changed (prior to that only guests of the Tavarua resort were allowed to surf Cloudbreak) it was in July and a big swell popped up in September and we went because it was the first time we could go. We had a good crew of Laurie Towner, (David) Scardy, Dean Brady and Shaun Cansdell but as soon as we arrived we realised all the guys were under gunned. They paddled out with the expectation of surfing without a ski and catching waves under their own power. Some guys were towing that morning. I think (Ian) Walshy got a mad one but when I saw Laurie try to paddle in to that big one that he didn’t make the drop on, on his 6’8, that to me was a changing point for Cloudbreak. Up until that point waves like that had been towed into out there.

The way the surfing is captured in Thundercloud; the sheer size of the waves; the way they thunder so symmetrically down the reef; and the way surfers so smoothly scoop up and into the waves of their lives – it all just seems so meant to be.

One hundred percent. That reef is 100% the best reef on the planet. It’s amazing. It’s incredible what it can handle. I don’t think there is another wave in the world that can break from two-feet to 20-plus and still maintain its shape and size. The shape of the reef and the different ledges it breaks on as it gets bigger, just the whole set up out there it’s meant to be, you’re right. It’s a wonder of the earth and a wonder of god’s creation.

There was some controversy on the day though and your film doesn’t shy away from it.

Nah, well it’s all part of the story. That day was special for so many reasons. I think what transpired on that day was meant to be in order to allow for all the action that took place. The decisions that were made I think gave us a little bit of everything; freesurfing in the morning, then the event went on hold, then they ran it when the wind dropped and the wind picked up again and it was terrible when they called it off. When it was on hold all the big wave guys charged out there but the waves weren’t good at the start, then they got better. There was controversy but a lot of it came from commentary from people that weren’t there. I think the guys who were there made the right decision. Saying that, now they’re prepared for it. They (World Tour surfers) know to take an 8’0 to Cloudbreak. If it happens again there is no way they won’t surf it.

The way you cover the controversy in the film definitely reflects on some people better than others. Some of these guys are surfers you’ve worked with very closely over a long time. Were you concerned with how the film might affect your relationship with them?

Yeah, for sure. But my job as a documentary maker is to document the facts and I brought both sides to the table. I haven’t just made a biased opinion of it. As a documentary maker you have to bring two sides to the story. You know, I spoke to Bede this morning and said to him it would be great for him to come and have a look at the production. I wanna know what he thinks of it and I had the guy from the ASP, Matt Wilson (the contest director at the Volcom Pro in 2012) come to the office and look at his stuff. He was concerned after he saw the trailers that it was gonna be a stitch up. I said, look it’s not, I’m just reporting on the facts and I want your story. He gave me the all clear. I haven’t cleared it with the surfers but the parts with Bede and Taj, they’re in the firing line because they were in the next heat and they weren’t ready and weren’t prepared to surf but at the same time I think all the stories they told me were just their version of events and I’m bringing that to the forefront. I hope they don’t think I’ve stitched them up because I don’t feel like I have. I’m just letting them tell their story.

The guys who stole the show that day were largely part-timers – Kohl Christensen installs solar panels back in Hawaii for a day job, Dave Wassel is a lifeguard on the North Shore, Kala Alexander works at a chemistry lab. Yet they risked their lives for the pure challenge of getting one of these waves. How important was it to tell their story?

Well, first and foremost I don’t think any of those guys are part-timers. They’ve grown up surfing and around the ocean and have committed their life to big wave surfing. They might not be on the same sponsorship deals as some other guys but they are totally committed to big wave surfing and surfing in general so they live to surf. But apart from that their stories are 100 percent relevant because they participated and they were pushing the limits along with everyone else that was there. Their contributions will be remembered and revered and hopefully encapsulated in Thundercloud.

Can you describe what kind of characters the likes of Kohl, Kala, Wassel and Healey are?

All four are pretty individual. Trying to group them together is pretty hard. I know Healey the best out of all those guys. I’ve stayed at his house over the last few years in Hawaii. It’s kind of hard to say: Healey is a maniac but a very calculated maniac. He puts himself in positions because he wants those kinds of waves and you’ve gotta be a bit of a maniac to want a 20 foot wave that’s pitching up like those things are but at the same time he thinks and plans everything out because that’s what he wants.

Your favourite part of the film?

Surfing-wise it’s hard. There are so many high points in that movie. I think the story about that big set is the culmination of the whole movie – the set where (Mark) Healey had his board in the lip. There are so many stories just about that wave itself – Kohl was trying to catch it, Healey was too deep but tried to look back and work out where he was at so he could catch the next wave like that, Makua and Joel were on the ski talking about going to tow one of them and then that thing came in, there’s the story of the photographer who shot it and won the Nikon photo of the year award. I don’t think a wave like that has been seen anywhere on the planet but the way global warming is going and the fact all the storms are getting bigger and gnarlier, we’re gonna see bigger and better.

In order to bring this film to a public audience, I understand you made some pretty big sacrifices?

Yeah, I’ve done everything 100 percent independently. It’s been a big task – a big task. Taking it on individually wasn’t that hard of a decision but I think the experience of going through it financially and funding it has been tricky. I basically had to cash in a life insurance policy that I had because I needed money and I didn’t have any. It’s been hard. I’ve got a little boy that’s 18 months old, a wife, a mortgage all sorts of stuff. But yeah, seeing it all on the big screen and people enjoying it will be worth it.

Tweet
This entry was posted in PHOTOGRAPHY, MOVIES, CULTURE, TRAVEL. Bookmark the permalink.